skip to main | skip to sidebar

Growing up, we loved the James Bond movies and remember well the excitement of watching Moonraker (79), For Your Eyes Only (81), and Octopussy (83) in movie theaters.  At a certain point during our elementary school days, we collected most of the Ian Fleming James Bond paperbacks at a discount bookstore.  We spent a good chunk of seventh grade laboring through the the novel Goldfinger (published in 1959), surely our first realization that movie adaptations can take considerable liberties with the source material.


Recently, while packing for a Thanksgiving trip, we stumbled across that dusty stack of Fleming novels.  Flipping through Live and Let Die, we were surprised to see that it ran only 159 pages.  And so, thirty years after reading Goldfinger, we decided to give Ian Fleming another crack.

Here's what we discovered…

* Fleming - and by extension the character of James Bond - certainly has a romantic appreciation for the finer things in a secret agent's vocation.  That is, Bond enjoys the good life.  "Luxurious" is a frequent Fleming adjective.  The novel takes great satisfaction in describing in detail Bond's expansive meals, his fancy cocktails, his sleek wardrobe, and his first-class accommodations.  Bond stays at the plush St. Regis Hotel in Manhattan and enjoys a ride from New York to Florida in a two-room train suite.  Room service is always a must.  Indeed, there is a travelogue element to the book as the author points out the exotic details of Central Park and Harlem and then Florida and Jamaica. (FYI, Fleming had an estate on Jamaica and that portion of the book gets particularly bogged down in Jamaica minutiae.)

* Fleming's Bond has a nasty streak.  This is not a guy who kills only in self-defense.  He's also not a guy that seems to have much of a sense of humor.  This is all serious business, even the giant room service breakfasts.

* We were surprised to see so many similarities between the book and the 1973 film of the same name.  We expected bigger differences.  Both involve an investigation of the goings-on of an African-American crime kingpin named Mr. Big who has a flair for the dramatic in that he uses voodoo to manipulate his minions.  And both book and movie feature an an enigmatic female character named Solitaire (played by a very young Jane Seymour in the movie) who may or may not be psychic.  The movie wisely dumped the goofy Captain Morgan treasure angle (you see, Mr. Big has discovered Morgan's treasure of gold coins and is smuggling those into the US to fund his operation), which is certainly unique but ultimately just too hard to buy.

* Fleming isn't necessarily a bad writer.  But neither is he a wordsmith.  It gets the job done, no more no less.

* The novel's racist stereotyping of African-Americans is shameless and, frankly, unbelievable. Sadly, it's without question the book's most memorable feature.  We can assume the term "Negro" was widely used in 1954, right or wrong, but there's no excusing Bond (and Fleming's) smugly condescending attitude when it comes to the African-Americans he encounters, whether it's patrons in a Harlem bar, porters on a train, a CIA asset in Jamaica, or the generic henchmen of Mr. Big.  Those who aren't viewed as hopelessly simple-minded (note the frequent tsk-tsk discussion of how easily dimwitted African-Americans buy into voodoo) are marveled at for actually being smart and capable in spite of their supposed limitations.  It's all very icky.  We wonder how accurate this all might be in reflecting 1954 racial attitudes.

* It would seem that bombs and dynamite sticks were a big thing for bad guys in 1954.

* Bond likes to take a hot shower, followed immediately by an ice cold shower.  This happens more than once.

* There's definitely a procedural element to the novel's plotting.  Not much really happens.  Aside from a couple of abbreviated gunfights and a nice set piece at the end, most of the scenes wouldn't feel too out of place on an episode of "Law and Order."  The good guys talk to people, gather clues, drive around or take public transportation, get sidetracked by dead ends, crack lame jokes, discuss next steps, then repeat.

* At least one James Bond movie cliche may have come straight from the books: it doesn't take much for Bond to completely charm the female lead.  A couple of moments with Bond and she's swooning.  Solitaire's psychic ability is intriguing, but it barely pays off.  She's there as a plot tool only - the bad guy's girlfriend who betrays him for the good guys, then gets kidnapped in order to allow our hero to rescue her.  Yawn.

* No Walther PPK.  For those who care about such things, Bond uses a small caliber Beretta.

* Shark attacks play a huge role in the story, but it all feels rather quaint because - at least in our opinion - sharks don't eat people in the real world the way they do in the book. Maybe it's easier to see that truth today than it was for a 1954 reader without access to endless shark documentaries on television. It's another variation on the novel's whole "exotic world" travelogue vibe.  Look at this scary Harlem jazz club!  Look at how sharks in Florida eat people!

* That said, the book ends with a fairly tense sequence (ultimately included in the For Your Eyes Only movie) involving a ticking bomb on a boat and Bond and Solitaire dragged through the ocean over reefs to attract sharks.

* Overall, it's a probably all an exercise in critical relativism.  It can be hard to appreciate what's new in the novel when in so many ways it probably blazed a spy thriller trail that countless others followed.  And so what seems musty and rather pedestrian today clearly struck a chord with contemporaneous readers in 1954 who found the novel exciting and thrilling enough to make it a best seller. 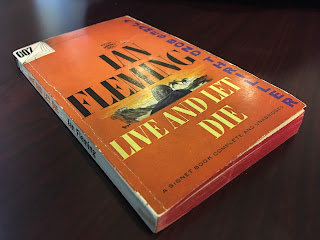